Or “How not to scare the everlovin’ shit out of your 2-year-old.”

(This is the first of my series of off-topic posts that will not clutter up your feed readers during the week, but will be posted on weekends only.)

Can I let you in on a little secret?   Many kids movies out there are about death.   That’s right, death.   Avoiding death, running away from death.   Death death death.   Not pretty eh?

Here are my movie reviews based on the premise that nobody wants their kids to be scared shitless. 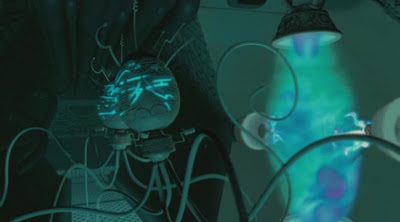 I have mixed feelings about this one.   On the one hand, it’s about friendship and acceptance, and there’s no death.   On the other hand, aliens run wild through town vaporizing people.   I shit you not. Vaporizing.   It turns out later that the vaporized people are not dead and are reconstituted at the end.   But seriously, vaporized.

Twig reaction: She is not perturbed by this movie, and she does ask for it, but she only seems interested through the first half where the main issues are “popular people are sucky buttheads.”   Once it gets to the aliens part, she gets bored and wanders off or demands a different movie. 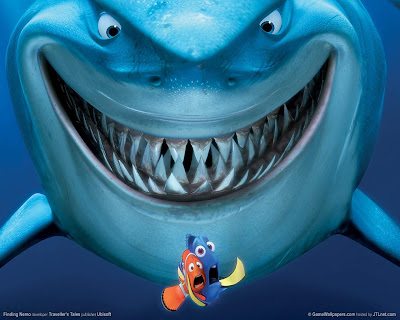 In this movie, Nemo’s mom bites it in the first scene, and Nemo’s dad is almost consumed by 5 different creatures throughout the course of the movie.   Yes 5.   Half the movie is spent running away from a pair of chomping teeth.

Meanwhile Nemo himself is going to be handed over to the certain death of a child who does not play nicely with her pets.

In conclusion: this movie will warp your kid for life once he or she is old enough to understand it.

Twig reaction: She doesn’t quite understand the imminent death part.   However, since she doesn’t know the types of fish (whereas with other movies the animals are different and identifiable), she gets a little frustrated and bored. 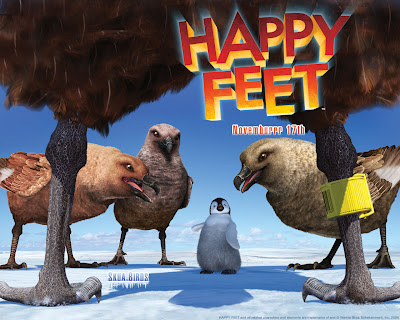 You’d think that a movie where the central tension was between “singing” and “dancing” would be appropriate.   Oh no, it’s not.   The penguins look creepy with their creepy animated tongues.   But what made me swich this movie off fast is when several birds of prey attempt to eat our fuzzy hero shortly after the credits.   No thanks.

Twig reaction: She was uninterested, and I never showed it past the first 30 mins. 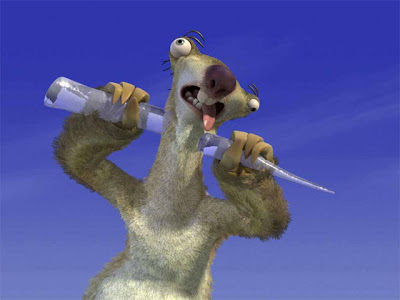 I swear, why is every movie about the food chain?   The saber tooth pack wants the baby human for “revenge” (and I guess to eat?) and their big plot is to disembowel the mammoth as a group.   Ick.  However, the actual movie is more about the group’s social interactions than death.  You only get the sabres trying to steal the baby at the beginning of the movie, and the trap laid for the mammoth at the end.  The “eating each other,” while it hangs over the movie, isn’t the central theme and kids might gloss over it completely.

Even though the animals are technically extinct, the kid doesn’t know the difference between an elephant an a mammoth, a sabre-tooth and a tiger, and whatever-the-hell that rodent is and a squirrel.   Just smile, nod, and don’t bother to correct.

Twig reaction: She loves this movie.   She loves the fact that there’s a baby.   She’s more interested in the squirrel and the acorn than the main plot, but she does like the elephant.   She is completely unaware that the tigers are trying to eat anyone. 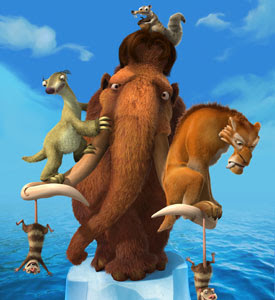 This starts with the bold premise that everyone lives in a valley that nobody can get out of, and they have to travel to a “boat”.   Along the way Manny meets a girl mammoth and her annoying possum sidekicks.   Pro tip: I don’t care if you ARE the last man on earth, saying “we need to get it on to prevent extinction” is just a bad pickup line.

The villains are rising water, gravity (oh noes, gonna fall off this ledge/through this ice), and two defrosted fish/gator creatures.   The sabre tooth doesn’t threaten to eat anyone (at least not seriously), but a religious zealot sloth tribe attempts to throw Sid into a volcano.  There’s a particularly disturbing scene where the vultures launch into a musical number regarding “food glorious food” that they are going to eat after everyone dies.

Twig reaction: Intense boredom unless the squirrel is on screen.   I guess the baby really did make the first movie. 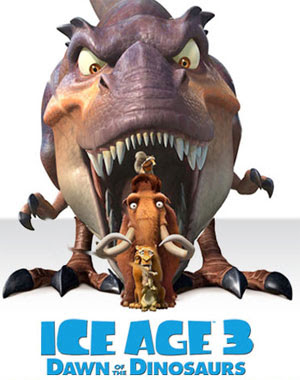 Sid, the sloth, adopts (steals) 3 dino eggs, which hatch, and the dinosaurs, who are creatures of instinct, think Sid is their momma, but also immediately try to consume their playmates.  Don’t worry, Sid makes them regurgitate their friends.  Momma dino comes back, and of course, tries to eat Sid.  So far a lot of eating.  But it gets worse!!  Momma dino takes Sid to her lair, and everyone else has to rescue him… but there’s a Bigger dino in town, bigger than momma dino, who threatens the safety of, uh, everyone.  I did not see this charming specimen, because I turned it off.  This movie fails.

Twig reaction: She was interested in the squirrels fighting over the nut, but otherwise bored, and demanded a new movie.  I was happy to turn this
charmer off. 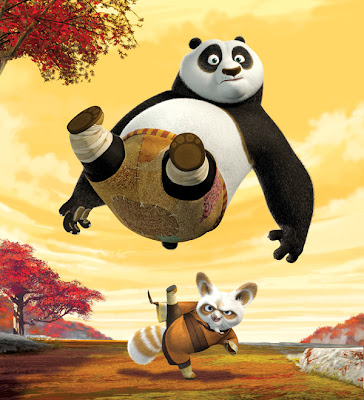 You’d think this movie is about fighting, which is bad.   Yeah, you don’t want your kid punching other kids.   But it’s fairly humorous with good lessons.

They rarely talk about “death”, “killing”, etc – only about “defeating” a villain through kung-fu.   At one point the villain incapacitates some of our heros, but it’s just that, incapacitation – and they are back on their feet right quick.   People get thrown against walls, etc, which might be a little scary, but I’ll take that any day over running away from something trying to eat you.

Twig reaction: She insisted on this movie, and ONLY this movie, every night for a month (“PANDA MOVIE”).   Seriously.   She loves the panda, and she loves listing off the other animals (the mantis is “the cricket”, and Master Shifu, the red panda, is “the rat”).   Nonstop gigglefest, and when there’s fighting, the only thing that really registers is “he fall down.” 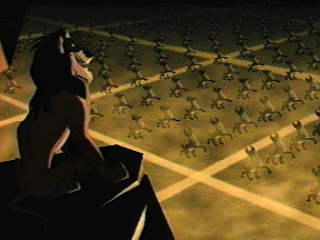 The generation that was brought up on computer animation is not going to be impressed by this classic.   It was awesome at the time but looks archaic now.

And whoa, it’s scary.   Would you take your kid to a rendition of Hamlet with Nazi imagery? Yeah, I didn’t think so.

Twig reaction: Wandered off in the first 5 mins.   Was completely disinterested. 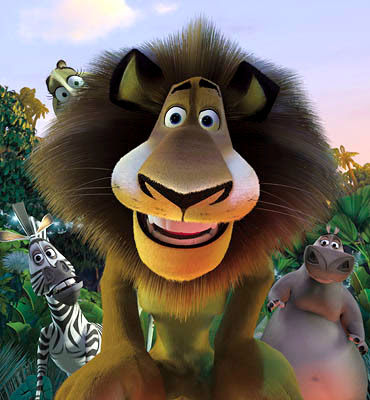 The upside of this movie is it has easily-identifiable animals and they are fun and cute.

Downside is that the central tension in the movie is the “carnivore’s dilemma” in which Alex the lion discovers where steak really comes from.   This can be scary to a child, especially toward the end of the movie when things get “serious.”

Twig reaction: She likes this one because the animals are identifiable and she likes to list off the zebra, giraffe, hippo, monkey, penguin etc.   The lemurs are “squirrels.”   She likes Madagascar 2 better. 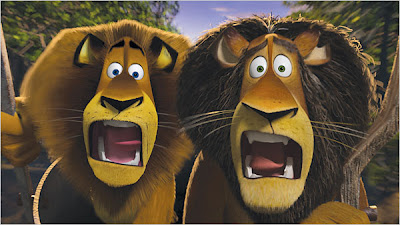 As a movie, this movie isn’t that good.   The plot is kinda pitiful.   But this is not about YOUR enjoyment, it’s about not scaring your kid.

The central tension in the movie is a smarmy Alec Baldwin lion (complete with large hair and plump belly) trying to take over the pride. No, really, that’s it.   There are side-plots about love, friendship, daddy issues, blah blah.   Somehow “what the lions eat” never comes up.   The scariest parts are a grandma with a gun threatening to make lion casserole, and Melvin almost throwing himself into a volcano.   And the blatantly ridiculous land shark that nobody can really take as a serious threat.

Plus, the penguins do shenanigans, and Will.I.Am from Black Eyed Peas makes a deliciously stupid hippo casanova.   I approve.

Twig reaction: Nonstop gigglefest.   From the flashback to “baby lion” to the plane crash (“they fall down”), to the penguins taking over jeeps, to lions having a competition and Alex thinking it’s a dance-off… all of it is completely fascinating to her.   “Lion movie” was the month-long favorite before the reign of “panda movie.” 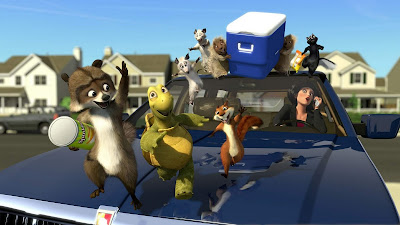 There’s a scary bear in a few scenes who threatens to – you guessed it – eat the raccoon hero, but otherwise the main villain is suburban sprawl.   Plus, the animals are common and easily identifiable to kids.

Twig reaction: Listing animals is fun.   She likes to watch this one over and over, and finds the bear funny, though she is oddly fascinated by the sourpuss turtle.   She hasn’t grasped that the bear is trying to maul anyone, so his antics are quite amusing.

The Tale of Despereaux 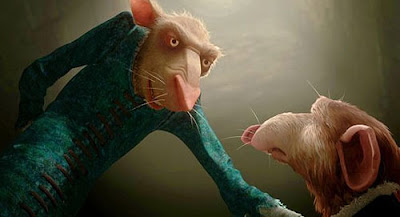 It’s a very good movie, lots of top talent voices – but while the hero is unobjectionably noble and pure, there’s a restrictive totalitarian mouse-world hasty to banish anyone who breaks one of the “rules”, and a seedy rat-world that is slightly cannabalistic in nature, run by a bloodthirsty tyrant.   There is also a cat who is kept in captivity by the rats to whom the mouse is almost fed in a Christians-to-Lions colosseum event.   Still, the “mouse running from the cat” motif is hardly new, and kids might be OK with it.

Twig reaction: She loves the cat and has absolutely no inkling that he’s trying to kill the mouse.   Miraculously, she is able to tell the difference between a mouse and a rat, and is not disturbed by this movie yet.   I’m disturbed by it.

Movies I am Avoiding 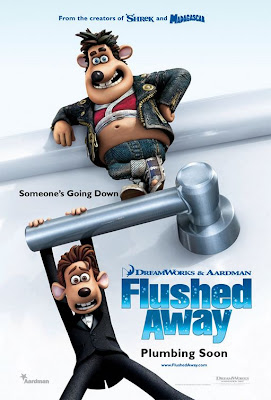 Wait, you want my kid to be afraid of the toilet? Or maybe think it’s cool to flush random crap (actually NOT crap) down the toilet? 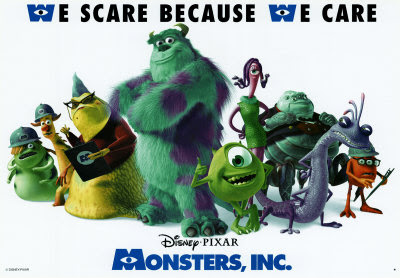 The last thing I need is “mommy mommy there’s something in my closet.” No thanks.

Yes, it’s a very cute movie.   But why tempt fate?

Movies I may show 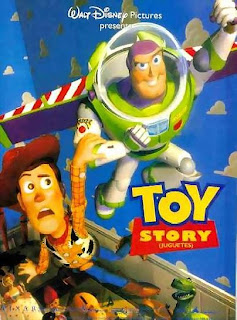 I’m kind of on the fence about this one, because the broken toys under the bed of the toy-destroyer neighbor next door are freaky. If they’re enough to freak me out, they will probably freak out Twig.

As for Toy Story 2, toy collectors are scary people.   Hehe. 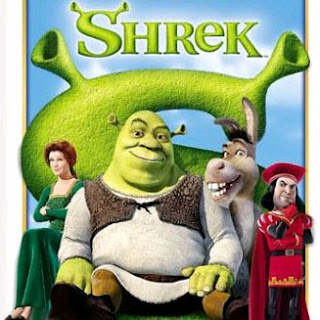 My memory on this one isn’t great, but it seems like while many of the jokes and themes are over a 2-year-old’s head, there’s no threat of imminent ingestion.   This probably won’t keep her up at night, though Farquaad is a strange and creepy king-wannabe.

Kung Fu Panda and Madagascar 2 are my top picks, with Over the Hedge as a close runner-up, though, as always, parents should pre-screen movies.   Some things that don’t scare Twig might scare your kid, so proceed with caution.