I’ve stayed mostly quiet on the whole RealID business since Zel knows more about general privacy issues than I do. But if you’ll indulge me gentle reader on this topic, I do have some points I’d like to make.

We all know there are plenty of great reasons not to be excited about RealID. Most are about how it exposes possibly rare or unique names, how it could expose professionals who don’t want to be outed as gamers, or even endangers young gamers who may not realize the full extent of their online actions yet. But what I want to talk about is how it is a betrayal of an emotional investment. To better illustrate this I will need to go to a long, long time ago, in a mmorpg far far away.

Before I ever created my first WoW toon, spawned next to the Northshire Abbey and saw a NPC with a bright exclamation above his head inviting me to go whack something with my mace, I was a fairly involved Star Wars Galaxies player. As you might remember from the post about guild democracy I met my guild on the forums. Now when I initially was asked to play SWG by a friend I didn’t understand how any game could be so good as to justify a recurring payment to play. I was a mmo noob. We all were at some point. But pretty soon I came to accept that I pay $15/month and I get to play in their house. It was a pretty fair deal. But here is the twist, all the time you play is an investment into your game. 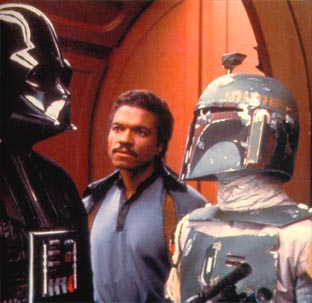 VADER: I am altering the deal. Pray I don't alter it any further

Last time I checked my mage had a /played of over 72 days. Now I also have various /played day totals on other toons, but it probably averages out to one or two hours a day, for the last 5 years. That is a considerable amount of time, but it is my hobby. If I participated in a bowling league, every hour played bowling improves bowling skill and the bonds with the bowling league; in the same way, every hour I play WoW is an investment in my online gaming league and skill at the game. And just like anything we pour time into, it gains and appreciates emotional value.

Here is the conflict. I wouldn’t have been as involved in Star Wars Galaxies if I had not been so involved on the official forums – and I would not and will not post on any message board that requires me to use my real name. If using real names on a gaming forum had always been the industry standard, I wouldn’t have played SWG as much, I would have never found my beloved Socrates Wyld Stallions, and I would have not come to appreciate the escapist feel of an mmo, and the strong communities it can form. And I would have never played WoW.

Knowing now what I have invested in being a mmorpg player as a hobby for just over 7 years, I can say this change puts me in a perilous conflict. I understand and appreciate how powerful communities can form from these games, but I also know that privacy is a real and serious concern. When I started playing WoW, I went with the understanding that the Blizzard accounting department would have my real name, but anyone else would know me simply as my character name. It is my escape from being who I am. (as an aside in real life I am awesome, yet I would still like to throw fireballs and be able to teleport).  Hell,  in Blizzards own ads they talk about how these famous people like Mr. T, Jean Claude Van Damme, Ozzy Osborn and William Shatner take on new personas. But now that is changing. And to many like myself this is a profound change in what kind of game we can play.

It is another division in the game based on what you are willing to “pay.” When the Sparkle Ponies came out I largely didn’t care, but I knew it was another aspect of gameplay I wouldn’t experience unless I was willing to pay $25. Now I am having something I always had access to restricted unless I am willing to pay, but this time it isn’t money, but rather my identity. Just like a sparkle pony was not worth $25 to me, the privilege of posting on the official boards is not worth the price of my real name. The other big difference is instead of not having access to something I never had before unless I pay, this time I am having something removed unless I pay. It is like having the Barrens no longer playable unless you pay a toll.

Blizzard says they want to stop trolls. Well the solutions have been proposed. A single handle for official forums based on account is pretty easy to do and would be fine. It provides enough accountability. But the other way to stop trolls is permabans. I have a longtime friend from the SWG days who never can post on any SOE board again. If they just took a hardline approach towards moderation, and had unique forum handles, trolling would come under control pretty fast.

I’ve had the experience before of a game changing in a profound and unsettling way before; most SWG players seeing the NGE would say that they have. At some point the changes are too great for you to stick around for, and you leave. MMOs can only change so much, before players will walk away. It would be really sad if the WoW Killer the games media keeps pining for turned out to be WoW itself.