I want to start off with an apology for the long delay since we last spoke about the future of mages. The site moving hosts, in game commitments with the Lizard and the Wookiee, raiding, and work have all contributed to the delay. But I’m a gnome of my word so we continue in our discussion of how to be a great mage.

Next to our trusty arcanefrostfireball topping the damage meters, mages are known for their affection for critters. Specifically the ability to turn foes into them for a short while. With the return of CC you will be expected to be a master of this long forgotten skill. Do not forget the lesson from kiting. When you have a crowd control target, it is your responsibility until the tank picks it up. So how do we make this easy for us?

Before the pull make sure you and the tank know what is your CC target. I am a big fan of the marking tools default in the game and have them hotkeyed to my F6-F12 buttons. And I usually prefer the kill order Skull, X, then figure it out from there. I also tend to prefer to have my CC target be moon. It is like Monopoly. Some people want the race car others want to the top hat, in WoW I want to the moon. In a pinch I will settle for the star. Also it is really helpful if you set the CC target as your focus. I have a macro that is just /focus to get them a separate target frame. 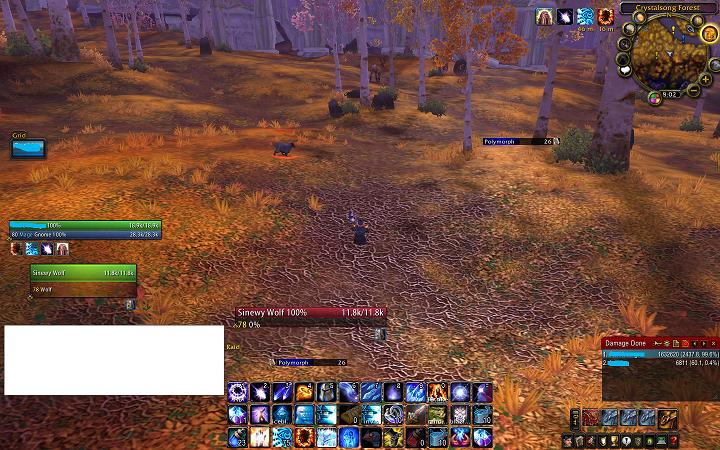 If you notice I have the Sinew Wolf both as my target (stuff right above my cast bar) and as my focus (under my character bar on the left). No matter who else I target the one on the left will always be my focus. Unfortunately in WotLK I haven’t have to use it much so I never took the time to make it better looking. I fully imagine in Cataclysm I will have a UI overhaul and I will definitely make my focus work better with the overall design.

Let’s face facts. You play with morons. I’m sure they are wonderful and friendly people, but they are morons. How do we know they are morons? Well they didn’t roll mage now did they? And despite you giving them Arcane Brilliance they will still use AoE near a polymorphed target. And how do we know that warlocks are extra stupid? Because they’ll drop a curse of agony on every target, and you will spend 24 seconds (unless they have significant haste) yelling that you should be able to decurse hostile mobs because of the emo idiot and his pet.

In the interest of maintaining a healthy blood pressure and keeping the calm and serene inner peace, move your target away from the rest of the pull, and away from your moron friends. Melee mobs shouldn’t be a problem. Open with a big single target shot to start kiting the mob away from the pack and off to the side. Casters should just be counterspelled when casting and they will work their way towards you. Ranged mobs who use bows or guns are a pain so if possible ask for a different target, if you get stuck with them ask the tank to move the pulled pack away from them. You could move up to the “dead zone” of 6-8 yds from the mob and walk it back, but you risk taking damage and the healer should expect you to be doing this before you attempt it.

Now that you have your target in position and firmly set as your focus you can target the primary DPS target and pew pew. Keep an eye on the focus frame, specifically at the time left on the “buff/debuff” for polymoph. When it is getting low, refresh it. Remember that every time you polymorph a target it will increase the chance it will resist the next polymorph. Because of this you can refresh too often.

Now there are three ways you can polymorph your target without ever switching off your primary DPS target. First if you have a program like Clique, you can set polymorph like this and just use that combo on the Focus Target frame. 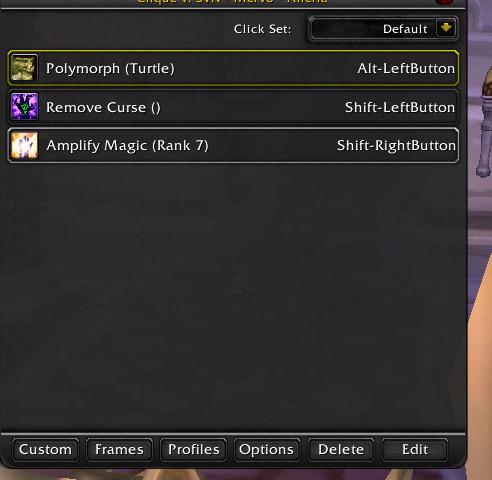 This would just mean you just roll your mouse over the focus frame on your UI and press hotkey 9 (assuming 9 is your polymorph).

Or finally you can just have this macro which will only polymorph a target set to your focus (no mouse needed).

The downside is that you will not polymorph anything that is not already your focus.

So I have Â every form of polymorph there is. And being the egotist I am liek to show these off with a random polymorph macro.

This is kind of a fun way to mix it up and showoff what you have. It is always neat to hear someone say “Wow I haven’t seen that before!”.

In case you are curious where you get each of those:

So now you should be able to polymorph with the best of them and keep your target in control the whole fight. Once you get a reputation as a good crowd controller you will be respected more than other DPS since you know what you are doing. I cannot stress this enough, what separates mages from other pure DPS classes is that when we are played well we shine in so many ways, and become invaluable members of the team. You won’t just be a DPSer, you’ll be an outstanding player that people will want to group with because you get stuff done, and you make the whole team a winner. Also you bring snacks.

Next time I will talk about actual damage dealing in the final installment.