I downloaded the update for GCD the other day.  You know, GCD… the addon that creates a little spark around your cursor to show you when the GCD will be up AND shows another spark for cast time.  It can show other junk like cooldowns, but we won’t dwell on that.

Anyway, this is the GCD I’m used to: 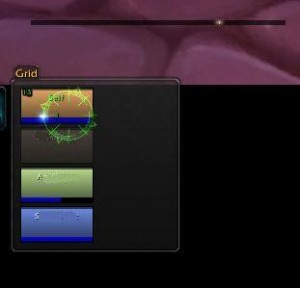 One spark: for the GCD 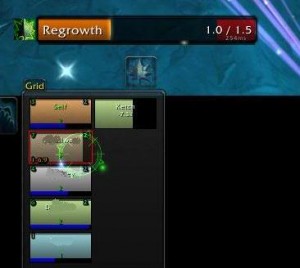 Two sparks - one for GCD, another for cast time (green).

Imagine my shock and awe at seeing this: 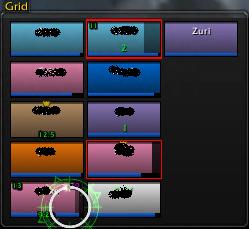 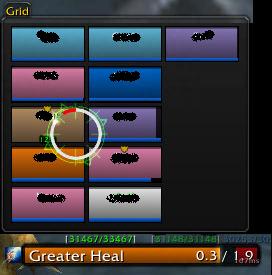 And the casting time 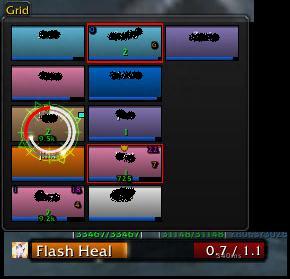 And both GCD and cast bar displayed.

Looks a little like the not-recently-updated Cast Donut, eh?

Ok, before we dig into the menus, here is kind of a map for the elements of this new circle. 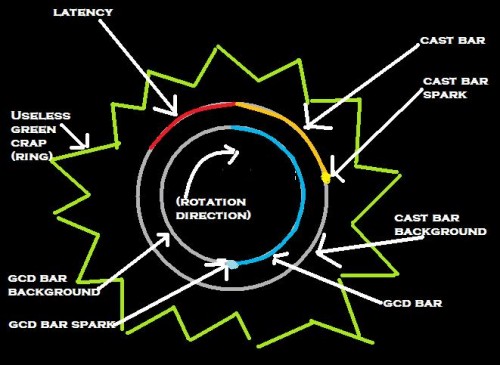 I am an artiste, no?

Now, when we look at the menus, you’ll know what is supposed to control what part of which ring.

First things first, the main menu.  I left the defaults alone. Attach to cursor is important if you are using it for watching GCD’s while healing. Otherwise you might as well be using Quartz. 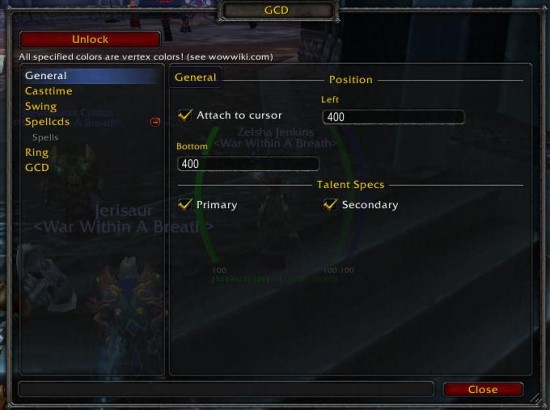 Keep it if you’d like, but I find it a damn nuisance and it doesn’t add much. Just uncheck “enabled” to get rid of it. 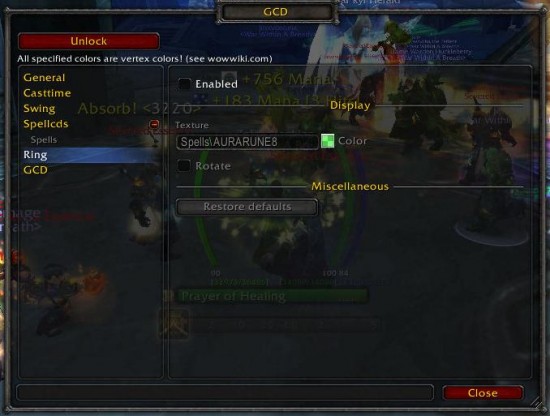 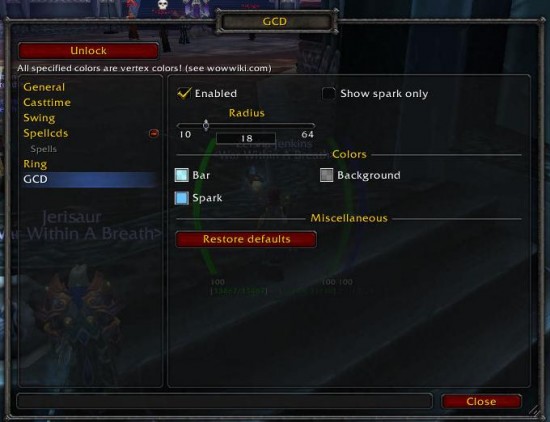 If you want it to look “old school” you can select “show spark only.”

You can also adjust the alpha/opacity of all the aspects of the circle in the color interface.1 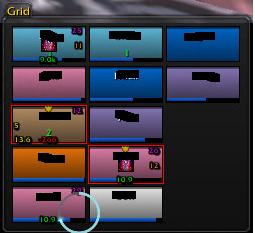 If you want to get rid of a certain effect, you will fade out the alpha or opacity to zero when choosing the color.

For example, let’s say I hated having a background.  I’d set the opacity to zero, and this would be the result. 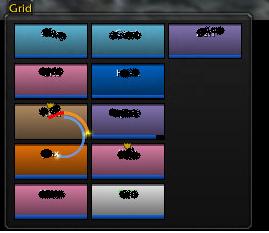 I thought I would like this setup, but I ended up preferring a “faded” background to no background at all.

I left the defaults alone, but it’s basically how big the circle is.  If you adjust this, make sure your circles aren’t all on top of each other. 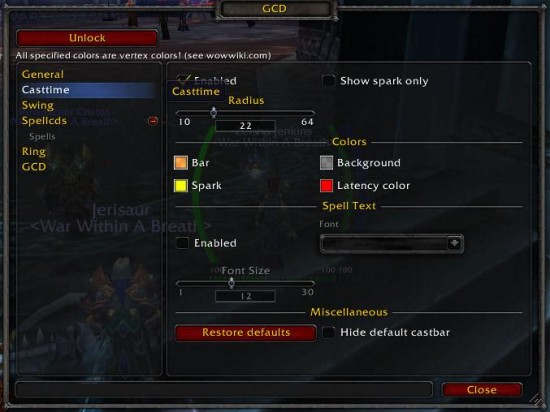 This is all the same stuff as GCD.  Bar, Spark, Radius, except there’s….

Kinda like Quartz, actually exactly like Quartz, you can color-code your latency so you know when you can start casting again. 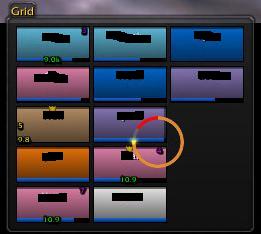 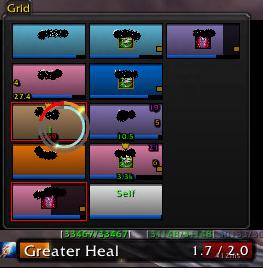 Yes, I chose orange and red because it’s most like Quartz. 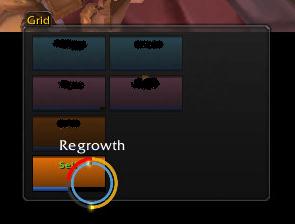 You can configure GCD to show you time left until certain cooldowns are up, and configure which spells are shown how they’re displayed. 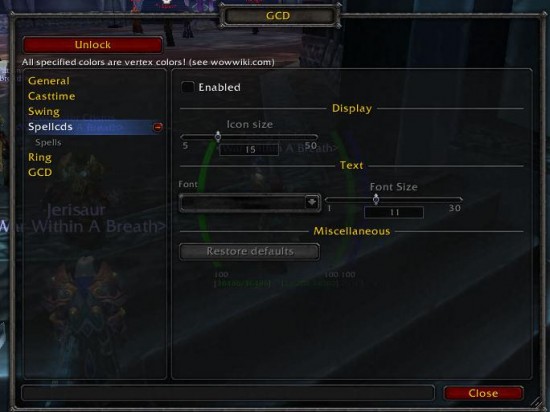 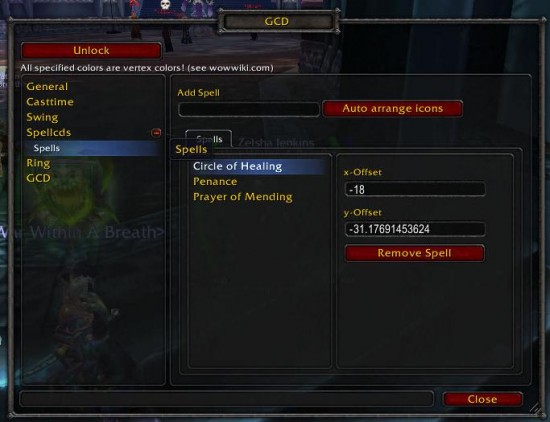 Now, here’s how it is displayed.  I promise it’s on the top-left of the cursor, but when you take a screenie, the cursor disappears. 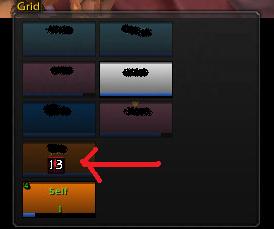 I gotta be honest, it’s probably not the ideal way to track CD’s. I’d use power auras or a similar addon rather than this one.  I feel like it’s just TMI on the cursor.

For, ya know, when you’re gonna melee? 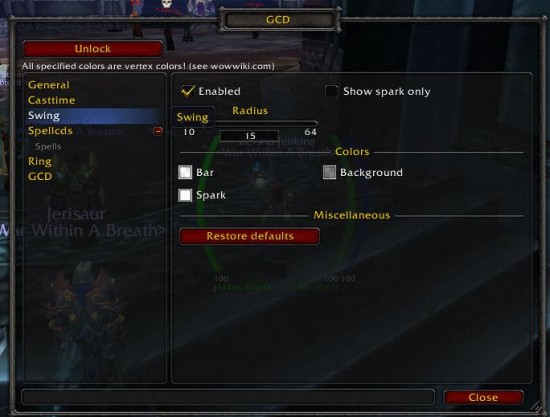 The circle is small (it sits inside the GCD circle). 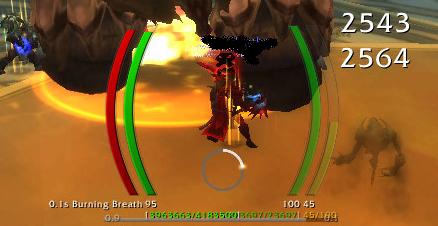 This screenie came at the cost of me doing craptacular DPS.

If I were going to use this for melee, I probably wouldn’t affix the circles to the cursor, since when you’re meleeing your eye isn’t necessarily drawn to the cursor quite the same as when healing.

I am super-excited that this is being updated now because not only does it look better and more useful, but if it’s being updated NOW it’s more likely to be updated and work with Cata.  Get excited folks!