Apparently the trick to defeating Arthas is to infect your disc priest with THE PLAGUE. As I felt like croaking hell on a stick, barely able to wheeze into vent, we killed him.

I’m not sure what was more exciting at that point: the kill itself or the swift and early end to the raid with the promise of imminent NyQuil. 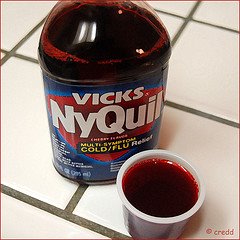 The Raid Drink of KINGSLAYERS!