Ugh, this chakra shit is hard.

I’ve learned some stuff since the last guide and there have been some changes to the way everything works (4.0.3a). So we’re trying this again.

Never fear.  If I can do it, you can do it. Even with messy macros.

This is primarily focused on healing, not smiting or any of that junk.

(At the time of this posting, the wowhead tooltips for Chakra and Revelations weren’t caught up with reality, so I screenied tooltips in-game. In the name of science.) 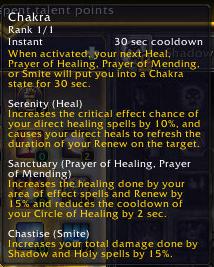 The CURRENT accurate tooltip, that Yours Truly screenied in-game. 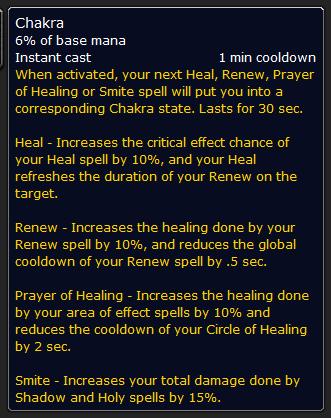 The old tooltip. The chakra states had dumb but descriptive names.

To break it down for you:

Some spells will extend your chakra state through the talent state of mind. However, Chakra has a 30 second duration and a 30 second cooldown. There is no reason to extend your chakra state. You will probably just waste mana trying to hit a spell you weren’t already going to use. If an extension happens, great. But since you can refresh Chakra as soon as it expires, don’t go out of your way to extend.

With a 30 second duration and a 30 second cooldown, you can be in a chakra state all the time. You should be.

While you are in a Chakra state, you can hit Holy Word for extra awesomeness. If you take the talent Revelations (you SHOULD), your holy word transmogrifies into SOMETHING depending on the state you’re in. At least we have fewer to remember, now that they took out renew. 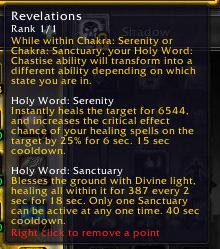 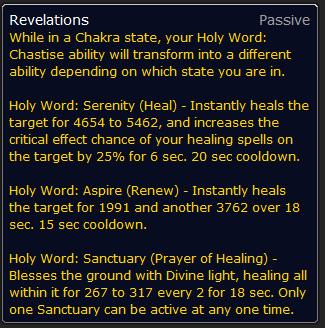 Old tooltip. For your reference. See, we used to have another chakra state.

Here’s how it breaks down now.

Make a Chakra Macro For Each Chakra State

As I learned from Erinys, Chakra doesn’t trigger the GCD.  Macro at will!  OK, you might run out of keybindings. I’ll grant you that.

OK fine, how to smite (do the same minus mouseover because you’re probably not mousing over your smite-target)

How to do this for clique?  There’s a guide for that.

How to do this for VuhDo or Healbot? Trick question! Switch to Grid!

If you want to do it all on the same action bar hotkey and get all fancy with the modifiers like shift and control… check out Step 5 in No Stock UI’s article or Leaf-Head’s Ultra-Terse Guide. I can’t even begin to fathom how I’d construct one of those.

Oh, Chakra states are easy to track (both duration and cooldown) with pretty much any currently-updated addon capable of tracking buffs or cooldowns.

For tracking chakra duration, I use Power Auras. Remember, you need to configure it to track all 3 of the possible chakra states. (And yes, I still call it Chakra: Heal on my screen and not Chakra: Serenity because I don’t remember at ALL the difference between Serenity and Sanctuary.  Why make my life difficult?)

For tracking chakra cooldown, I use the good ol’ default cooldown timer bar in ForteXorcist. (The cooldown part, fortunately, only relates to “Chakra” and you don’t have to worry about WHICH ONE it is.)

These new names are impossible to remember just like the stupid chakra states (I mean… serenity and sanctuary, could they SOUND more alike?) – and if you have the HW: Chastise button on your toolbar (WHICH YOU SHOULD), it does automatically change to become the new HW: Whatever, tooltip and all, when you enter the appropriate chakra state.

Now, if you ask me what happens if you trigger the cooldown for it, and then promptly shift into a new chakra state with a different cooldown what happens? Don’t know. Your normal cooldown tracker addons don’t know either. They are going nuts. ForteXorcist won’t register it correctly (even after I entered the names manually).

I couldn’t for the life of me get this to work. Fortunately, the folks at Tales of  A Priest DID get it to work. Simply go to their Power Auras page and copy the appropriate string. Their code works for all forms of chastise, and it is what I am currently using.

Honestly, that’s just a good idea for ANY power aura that you want to do.  It’s always easier to modify a pre-made than to make one from scratch.

You can use the cooldown that appears on your hotkey on your action bar. This isn’t so bad.  This is what I used until I copied the Power Auras string from Tales of a Priest.

Now, you can fancy it up a bit, like I did.  You can use Dominos or Bartender to give Holy Word: Chimaera its own special one-icon half-transparent big bar so it looks a little more like it’s supposed to be a cooldown tracker and not a dressed-up button. 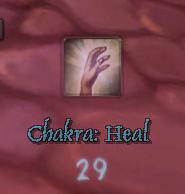 There it is, above the power aura indicator. Chastise is ready.

And OmniCC (yes, updated) will provide you with a neat little number that ticks down. 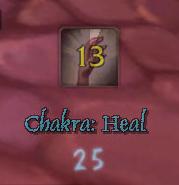 Now it's on cooldown

I have it show up only while in combat and remain hidden the rest of the time. In Dominos, you do this by setting the opacity and faded opacity of the bar to zero, and then entering the following into the “show state” box: [combat]100;show. This forces the opacity to 100% while in combat.

Post-Patch Priestly Ponderings from Harpy’s Nest. Erinys has some awesome macros for canceling your chakra state so you can toss out stun-chastise at will.

Edited to add: Oestrus’s Guide to the Chakra Sutra from Divine Aegis. Updated 11/27!

Better Ways to Do It?