After Hyjal we headed toward the Maelstrom to talk to Thrall. He was still casting whatever he was when I saw him on that vision thingy before Vashj’ir a few days back. Holy cow and I thought portals had a long cast time.

Zel’s impression of Deepholm with all the floating rocks and stuff was that it was like Netherstorm but more depressing. I however just pretended I was a Gnome Astronaut on the moon. “One small step for gnome, one giant leap for gnomekind!” 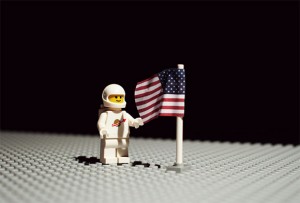 Not much to say about this zone. It had all your normal quest tropes, I didn’t notice much phasing really, which is probably a good thing. But I did learn two things about the game.

First there is a quest where you have to summon some giant Tirestack like monster in an enemy camp. What I learned is that you don’t have to, or shouldn’t kill everything you summon. Important safety tip on that one. 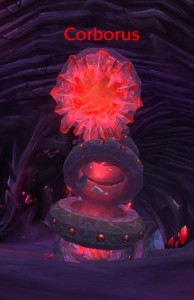 It is the almighty Tirestack Monster. Tread carefully or you will be run over!

The second lesson is a quest to go kill the Broodmother that required you to jump from floating stone to stone to kill her. She would attack one stone at a time until it fell. I don’t know for a fact, but I STRONGLY suspect that the jumping mechanic will be used in a raid at some point this expansion. The same mechanic was used for whirling vortexes in Vortex Pinnacle so learn it now.

Be sure to quest this zone to its completion of repairing the world pillar (the core plot point of the zone) so you can unlock dailies and get a really nice blue item. By the end of the zone you should probably be honored with the Therazane which is great because it allows you to get a nice shoulder enchant. Like Hodir in Wrath you need to get rep with these guys just so you can have the best shoulder enchants available. But unlike Hodir they have a tabard so do the zone, grab the tabard and never worry about the dailies for a rep grind like our Hodir friends up north. 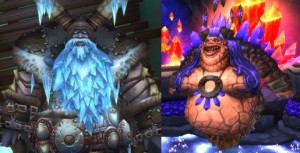 Don't they make a cute couple?

Overall the zone was pretty well done, my only gripe was the visual touches on the zone. The dark caverns with floating rocks just didn’t appeal to me, especially after the lush sea floor of Vashj’ir and the bountiful green on Hyjal. That is just a personal taste thing, and your experience may vary. But considering the rep from Therazane and the quality of the quests I would not skip this zone on replay.