Back in November I QQ’d over my threat generation ability as a warrior tank. Well since then I leveled the warrior to 85, have done all of Vashj’ir, Hyjal, Deepholm, and Twilight Highlands. All those shiny epics, gone. I’m now sporting mostly blues and a few greens. The stats are probably better designed for the new tanking system. Looking at my armor as of last night (I did get 2 upgrades by the time I logged out) my core stats are:

I AM NOT PREPARED! Wait that was two Expansions Ago.

I’ll freely admit I am not anywhere near the level of doing all I can do to be ready to tank heroics. I am missing enchants left and right. I do have gems that are appropriate, but some of my gear is still clearly more DPSy than Tanky. That is just the result of still working my way through rep grinds and quest rewards.

So last night I tanked Halls of Origination with Wookie and Lizard. Lizard is an enchancement Shammy who is 84 (avg ilvl 314 after last night). Wookie playing his level 85 Warlock(avg ilvl 319). We queue up for a pug choosing that instance because it has lots of bosses and therefore can be a bit of a loot pinata if you make good time.

Overall the problems I complained about in my last warrior post seemed almost reversed. I will say my group was really good about skull then X and CCing when directed. I played the bossy tank because I find it is helpful to be assertive. to get pugs rolling well. My threat generation seemed to be no problem, even on pulls where we had several mobs and couldn’t get CC right. On bosses the threat lead I got was really quick and just got bigger and bigger. In fact my threat lead got so large I started slacking on it opting to address the other main problem, namely survivability.

It seemed our Shaman healer was constantly running out of mana about 50%-67% through the boss fights. By this point I had a serious threat lead and would hover over cooldowns in case I dipped into uncomfortable health land. I know healer mana is a much bigger problem this expansion than last, but it was pretty difficult for me to tell if the problem was the healer trying to do too much and spreading himself thin, or me being too much of a mana sponge and forcing the mana issues, or was it the DPS underperforming making fights last way too long for the healers mana pool. Probably it was a blend of these three. Some of the issues will be solved with gear over time, and some of it will be solved with people learning to play their roles better.

How I Work Through Abilities

In case anyone is wondering how I chose abilities to get threat. I know it isn’t the ideal priority, but I used this as the base idea and tweaked it based on situation. For example on trash pulls I weaved shockwave in there to maintain AoE and used cleave over heroic strike, on boss fights I move rend down into the mix favoring a quick revenge/shield slam to start. This isn’t intended to be a chart on the ideal Threat Gen method. There are too many variables in tanking to do anything ideal all the time. This if anything is a blend of survivability and threat. Obviously you need to throw in interrupts when you need to, to prevent unnecessary pain and suffering on yourself and your party. 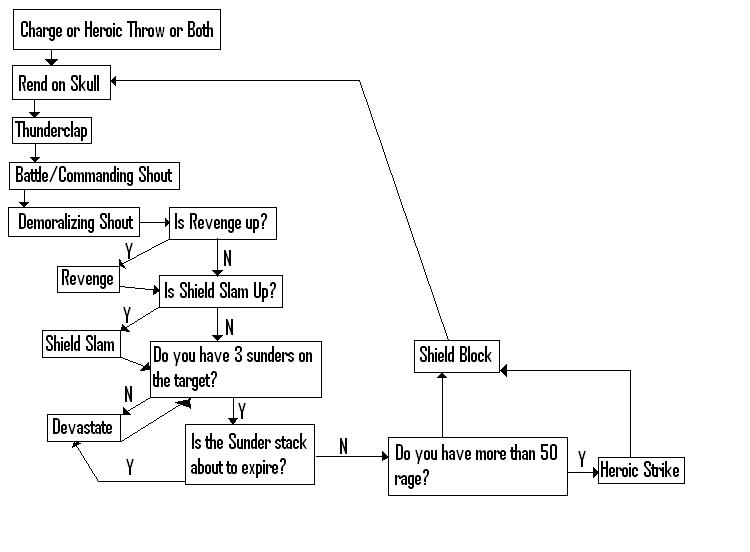 Warning: This is a general approximation of a tanking priority flowchart. There is a distinct difference in AoE vs Single Target tanking, and tanks should be able to understand the difference.