Now that the dust has settled from the whole “not a huge fan of Uldum” set, I can finally finish my Cata Content review with my favorite high end zone of this expansion. Twilight Highlands isn’t the most visually stunning of the new zones (that would be Vashj’ir), it doesn’t try to push the envelope of what WoW could be (Uldum’s minigame and movie emporium wins that title), but simply put Twilight Highlands is the most WoWish of the new zones. You have the long time horde versus alliance rivalry in Dragonmaw versus Wildhammer Clan. You have dragons, you have the Crucible of Carnage, and you get to see Thrall in one quest which I really liked. You get a Maw of Madness which feels very much like  Yogg, but being the Star Wars nerd I am I initially though “hey look its a Sarlaac Pit on steroids!”

Before you even hop on a rickety plane to fly out to the Twilight Highlands, for the Alliance you do a series of investigative quests in Stormwind with Prince Anduin investigating the Twilight Cultists. I will say that Prince Anduin isn’t much in a fight, but for the first time I’ve seen an NPC tagging along with you will properly mount (even use a flying mount when appropriate) to follow you around.

Somebody has grown up.

The quests take you all over Stormwind and felt like as real as an investigation you could have in an mmo. The big reveal leads to a climactic confrontation in Stormwind keep and yields a nice blue item.  After that you see an homage to Flintlocke and travel with him to the zone proper.

Landing puts you immediately in a fight for control of an Alliance Keep. The quest objectives are straightforward  and you quickly see a transformation of your environment as the Alliance gains control of the keep which serves as a base of operations for the early part of the zone. From there you start pushing outward along the coastline and get a real sense of the fight emerging between the Alliance and Horde (through the Wildhammer and  Dragonmaw). I really enjoyed the beach storming scene since the first time you hit it, you are trying to figure out what to do amongst some chaos. But the confusion level wasn’t too high to not get a plan together quickly.

After that you start working with the rival factions directly. I can’t speak to the Horde side, as I am alliance, but considering I constantly see horde players attempting to thwart my efforts to help the Wildhammer Clan I can only assume you jerks are having fun. A lot of the Wildhammer quests involve getting dwarves back together after attacks from both horde and the Twilight Cultists, helping to secure provisions, and finally in a major plot point you help with a marriage. This allowed Blizzard the chance to make some fun twists like helping to write a song, and provided quite the memorable wedding. 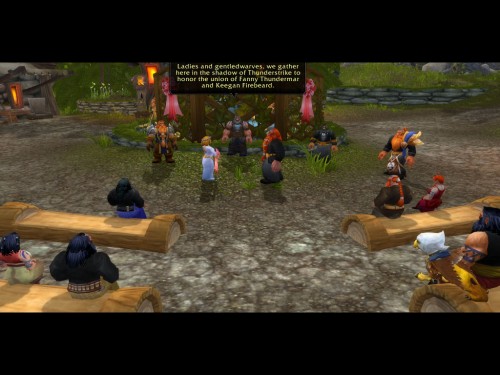 We are gathered here today.....

Soon after that you are helping our now old friends the Earthen Ring out with the Maw of Madness. The fight is now shifting towards the Twilight Cultists and less on the Alliance and Horde Struggle (at least in my playthroughs your individual quest completion order may do it differently). The pivotal part of this quest chain is the actual fight down in the bottom of the Maw itself. The whole place is creepy and the fact that the UI has a pop up digestion meter only adds to it. One twist I found particularly fun (though frustrating the first pass) was the Consumed by Nightmare achievement. At one point I am in a dream state, though I didn’t realize it with Thrall asking me to attack Deathwing who is out of range and I can’t mount up to fly closer. I was starting to panic a bit wondering if I missed some core quest mechanic like I did in summoning the Tire Boss in Deepholm. The fact that you can’t “win” in some of the nightmares seemed like a nice check to my ego which was overinflated since we killed the Lich King.

Time to Play King of the Mountain

The remainder of the Zone involves helping out Red dragons as they attack Obsidium Dragons. We get to see Deathwing in an epic fight. I really liked this because while Burning Crusade’s chief villains were never really seen by players until endgame raiding, Wrath had Arthas show up way too much. Here is a nice story that gives people some villain face time, but doesn’t make you think “Deathwing again? This is what the 40th time he’s shown up?”.  The big finale fighting against the Twilight Cultists has you fighting Ogres and Company up on a purplish colored rocky shelf. The fight to the Twilight Cultists takes center stage and the area surrounding the Bastion of Twilight is a nice finish to the zone with many great quest rewards. I enjoyed this even on my second play through and have been recommending to guildies to complete twilight highlands over Uldum if you had to pick only one.

Overall I think the Cata expansion was great. From 80-85 went quickly, and the zones by and large were fun to play and did a good job with the narrative. Harrison Jones aside, I felt like I was part of the action, but never made me feel over powered to the worlds I was questing in. By the time you complete all 5 zones you should be on the cusp if not into enough blue gear that you could start queuing for heroics which is nice. And you should have a nice dent made into your rep grinds so you can grab a few more ilvl 333 and 346 pieces to start dungeon crawls in style. If I had one complaint about the overall experience is that it seemed too short. I know it was only five levels, but it just seemed to go by too fast. But when I say that I also remind myself of that old showbiz phrase “Always leave them wanting more.” And in that Blizzard has done a good job.