↓
This entry is part of the series: The Casual Raider's Handbook

There is no one right way to gear up.

Say it with me now: There is no one right way to gear up.

There are definitely wrong ways, but there is no one end-all-be-all way to get raid-ready. 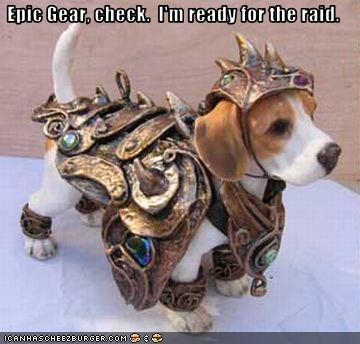 Which methods are right for you?

How to get the gear in the most time-efficient manner?  It depends on your guild situation, personal preferences, and schedule.

If you spend all day at work playing the mobile auction house, then money is probably no object for you.  It will be time-efficient to go ahead and purchase some pieces on the auction house.  You may be able to do that before you even log into the game for your game time.

If you are frequently interrupted during your playtime, dungeons may not be doable for you.  You may want to focus on finishing up your quest gear and then doing dailies for rep gear.  Those things you can step away from easily at a moment’s notice.  It goes without saying that you should prioritize based on which pieces of gear you want.

If you have a continuous chunk of time that’s uninterrupted and during prime time, AND you usually have guildies online, it may give you the best chance for quick loot to do a regular or a heroic.  Don’t get greedy!  Don’t queue for a random or a run with pug members unless you’re absolutely sure you can handle whatever is thrown your way.  It’s not particularly gear-efficient to spend all night wiping.

You won’t be able to get everything you need using one gearing method, but at the same time, you should be focusing on the methods that work best with your personal situation.

I have a confession: I hate dailies. I don’t do them.  Well that’s not that accurate.  I only do them if I’ve exhausted the other gearing options and I’m still missing something. So basically never.

I did Hodir dailies because the shoulder enchants were must-have and there was no other way to get them.  Well, that lasted a week, on and off. Then I just traded in the doodads for rep. Hodir can maintain his own phallic equipment.

ATT, on the other hand, became really stressed out when Halls of Reflection popped up on the random.  After a LOT of failed attempts, he flat-out refused to tank it. He may have missed out on some awesome loot – but it was just too odious to tank.

If your guildies all happen to be online and want to run a heroic, and you HAPPEN to be hard-core into your dailies at that same time, for the love of Pete, drop what you’re doing and go with them. Your dailies can wait.  The heroic won’t. Be flexible and seize opportunities that present themselves.

Go easiest to hardest. Don’t start out bemoaning that wands are found almost nowhere and start making valiant efforts to get one.  Instead, start with the gear pieces that come easiest to you.

An upgrade makes you stronger, regardless of whether it took you 10 minutes or 10 hours to get.  Every piece you get makes the next piece easier, because you’re that much quicker.  And the piece that you think is “oh so difficult” may find you by luck in the meantime.