↓
This entry is part of the series: The Catclysm Fire Mage

So you downloaded power auras and loaded up wow. Type /powa and you should get a screen like this. 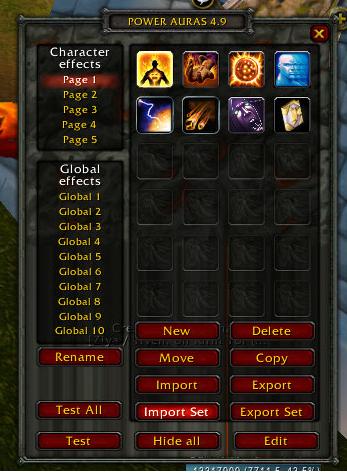 The first time out you should have no power auras so you will select New. After you set one up you’ll have icons like I have here and any changes will be done with the edit button.

For a Fire mage there are 3 types of Auras you need to know how to set up. Buffs, Debuffs, and Spell Cooldowns. It is important to correctly identify what type of effect you want to highlight to make Auras work.

As far as debuffs there are two you want to track. The first is Living Bomb. The second is Critical Mass. To maximize DPS potential on Living Bomb it is important NOT to clip your DoT. That means if it is going to finish in 2 seconds, don’t reapply until it is finished. If you do you miss out on significant DPS from the Living Bomb’s explosion. 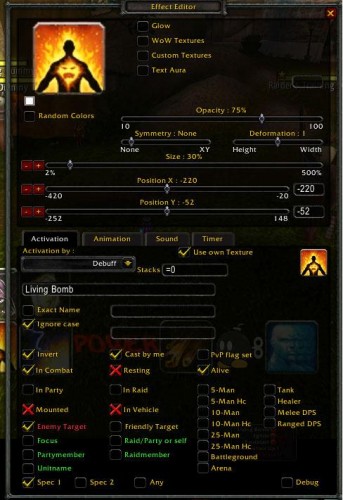 The top part that has sliders for icon, opacity, size, position etc is purely cosmetic. The part we are worried about right now is the Activation tab on the bottom. I like to use the abilities own texture for Living Bomb, but if you want one of the Power Aura icons instead you can select it from the top part.  Here are the key things to check for any debuff:

Now like I said above you will be using these for the debuffs Living Bomb and Critical Mass. The way these are configured they will only show up if the debuff is missing from the target. If they are on the target already you should be casting other things anyway.

One of the core mechanics of Mage in any spec is to respond to Procs. For Fire Mages this means knowing when you get an instant and mana free Pyroblast. But there are other procs you should be looking out for as well. Here is my Power Aura for knowing when Hot Streak is up giving me the instant Pyroblast. 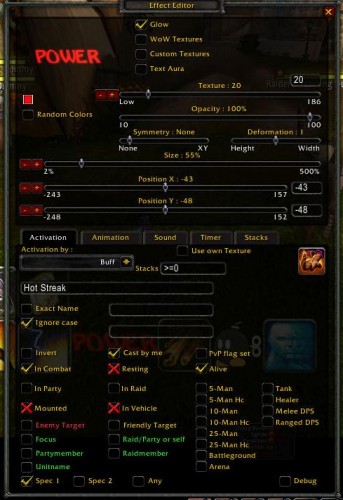 Now in this Aura I have decided not to use the fiery hand buff picture opting instead for the word POWER in Red. The key differences between this and the Living Bomb are as follows:

Now you should be using this for Pyroblast and Impact. However it is important to know when you need to respond to Impact. It will stun the target which is generally fine, but it will also spread DoTs to nearby targets. If crowd control is nearby you want to be very careful about using impact. It is important to remember that just because an Aura is displayed doesn’t mean you should respond to it. It is simply a nice notification that you now have that option.

Another use of the buff style of Power Auras is to know when your trinkets are proccing. I currently have Sorrowsong and Anhuur’s Hymnal . When these proc I get 1512 spellpower for 10 seconds. In order to maximize DPS when I get that boost I want to go from a hover rotation to a burn rotation if I am not doing so already. So I have my trinket’s buffs show up when they proc. 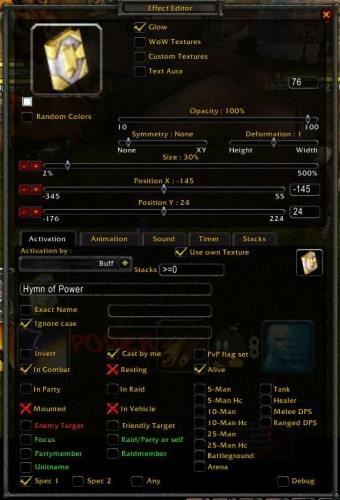 As you can see it is almost identical to the Hot Streak notification. To get the name of the buff you can go to the target dummies and just cast spells until they proc. Keep an eye on your buff bar closely and when they come up mouse over for the name.  It is important to match the name exactly.

Some spells are  use everytime off of cooldown. Flame Orb is a prime example of this. In a boss fight where there is no CC of adds you should be firing and forgetting Flame Orb every chance you get. Here is my aura for that. 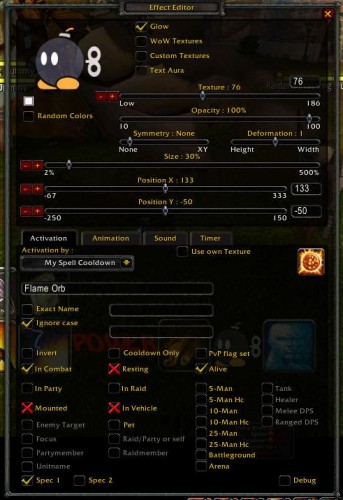 A very simple Aura that just let’s me know I can, if I want, to cast Flame Orb. Key aspects of this are:

A quick note about Combustion. The optimal use of Combustion requires a combination of effects on the mob, and therefore should be saved until Ignite, Living bomb and Pyroblast are all on the target. Power Auras (at least to my knowledge) is incapable of making multiple condition Auras. Luckily there is an addon to help. Check out CombustionHelper.

So now you have the Auras all set up, and if you didn’t mess with the top section (icon, position, opacity etc) they are a jumbled mess on your screen. Let’s clean that up some. Go back to the main menu. 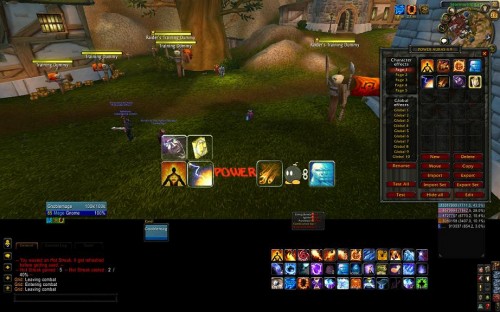 I set it up so I have the top row being my trinket buff notifications, and the bottom row are the Auras based on spells I use. From left to right they are Top Row: Sorrowsong then the Hymnal Trinket. Bottom Row: Living Bomb, Critical Mass, Pyroblast, Impact, Flame Orb, Mirror Image.

So let’s see how that translates into combat. I started spamming scorch and saw this. 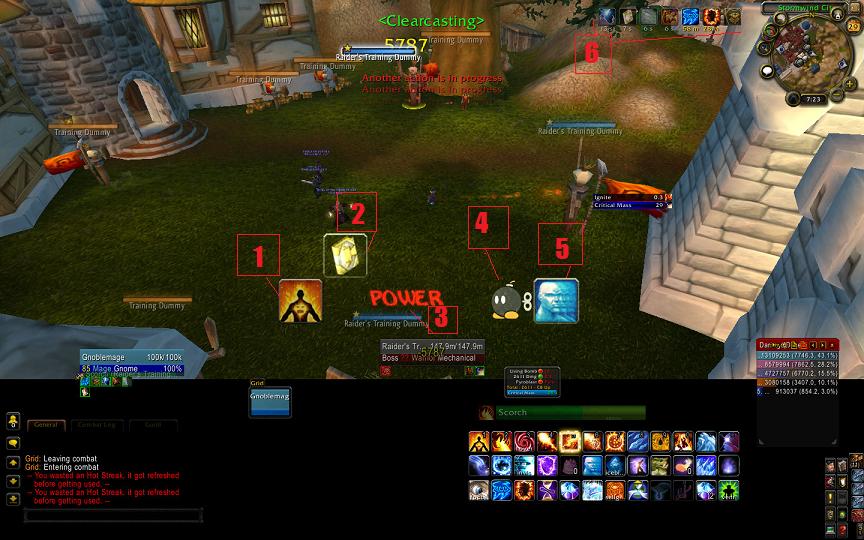 So let’s see what my Auras are telling me.

Now these are just the ones I use. Some people also like to put up buff reminders for things like Molten Armor or Arcane Intellect.