Or “How I can yell at people to use the lightwell AND see if they are actually using it.”

No Stock UI recently covered Raeli’s Spell Announcer, and I decided to give it a try.  It’s just great! 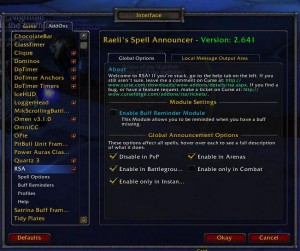 First, as seen above, you configure to announce only when you want it to.  Maybe you want it to yap in battlegrounds, or maybe that will drive your teammates crazy and lead to whining. 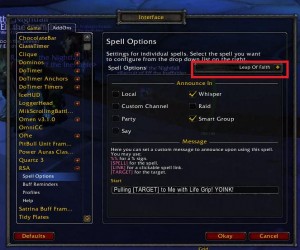 Choose your spell from the dropdown.

How to turn it off?  Simple.  Uncheck all the channels that it could possibly announce in.

For example, one of the options is “power infusion.”  Since I don’t share power infusion with others, I turned it off.  I don’t want to rub it in the face of the group that I’m getting power infusion and they’re not.

Each spell will have various things that can be announced, based on which spell it is.  For example, if something has a definite beginning and end, you will get the opportunity to set messages for the beginning and end. 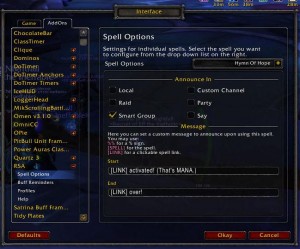 Guardian Spirit’s is complicated, because it has beginning, end, and a note if the guardian spirit is “triggered” by death. 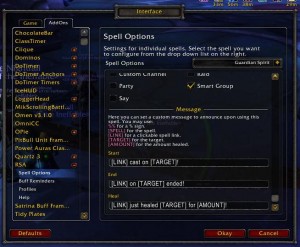 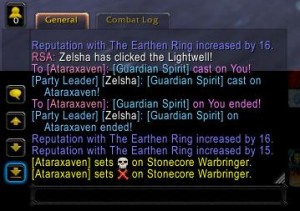 But when I say complicated, I mean that the addon author has already worked out for you what events you MIGHT want to announce, and built-in the options.

There’s also the option to announce buffs.  But I have that turned off. 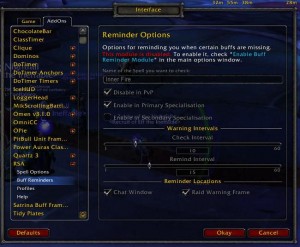 Let’s look at those “Announce in” options again.

What do they Mean? (Besides the obvious)

Oh, Local, you are mah friend!  Things that only I need to know go in local.

Let’s look at the setup: 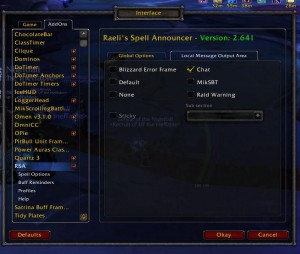 I have mine appear in my chat box.  But you can have them appear in scrolling battle text, as a raid warning, and all sorts of other places.

Now, why would I need announcements for myself?  I know when I cast a spell.  But I do not automatically know when someone clicks the lightwell!! 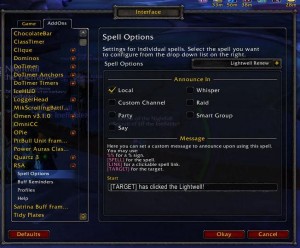 Awesome, right? I get a message in my chat frame whenever anyone clicks the lightwell. 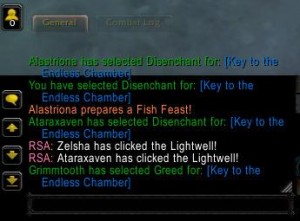 Most of the messages are fairly straightforward.  “I have cast such-and-such.” or  ” Such and such has expired.”  However, you can put in your own flair.

Think of Your Audience

“Casting Such-and-such” may not cut it.  For example, the tank asked me “what’s the difference between Hymn of Hope and Divine Hymn.”  Good point.  So I put a little explanation in parenthesis for each.  It’s fairly easy to change the spell text and click OK.

See, the custom text specifies that hymn of hope is for MANA.

If you want to remind people to use the lightwell, you might want a more “forceful” message. 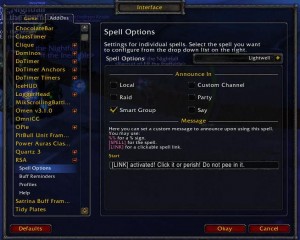 This without fail causes people to emote peeing in or around the lightwell.

There are a few things I want to announce that are not on the list, and I can’t figure out how to add custom states to announce, short of digging into the lua.  (ew).  Notable omissions on the priest side are healing floor (Holy Word: Sanctuary) and Mind Control.  Other than that, I’m very happy.