I Tried Something New Because I Failed Repeatedly

Man, I was embarrassed the other night.  I came home from work, and they needed an AOE healer to sub in.  “Guys, I got this,” I confidently bragged over vent.

This wasn’t the first time I had died to this particular fire.  I was in fact the main fire-death culprit last week.

I saw the fire coming.  I moved.  I was always a second too late.  Usually I’m pretty good at staying out of the ick.

OK, I thought, well since I know exactly which particular ick I always stand in, I’ll just configure DBM to extra-warn me.  Nope.  It was either on or off for each status.  Short of disabling everything else, there was no way to really drive it home to get out of this particular fire.

In desperation I tried Bigwigs, which I had used in BC.  Guys, I shit you not, I stood in that fire ZERO times after installing and configuring Bigwigs. I was never stranded too far out at an inappropriate time.  I never stood in the group when I had the blasty doodads.  Just. Incredible.

Now, I’m not saying that it’s going to work that well for you.  Different preferences for different people.  But in this case, Holy crappo, I have improved dramatically. 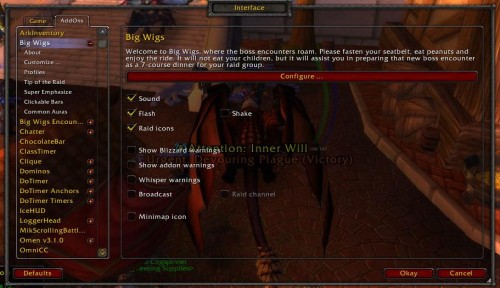 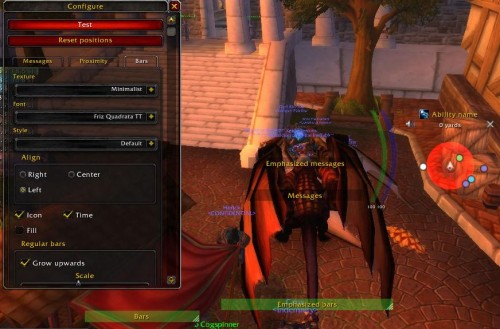 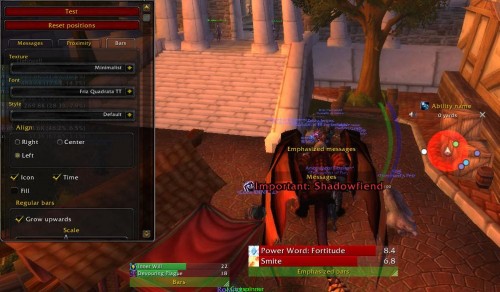 Test mode. No, you're not gonna see it in action. I was too busy moving out of the fire to take screenies.

However, it has a few more things: 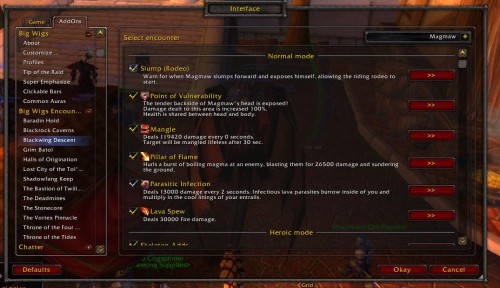 Here's the main menu for Magmaw, for example. 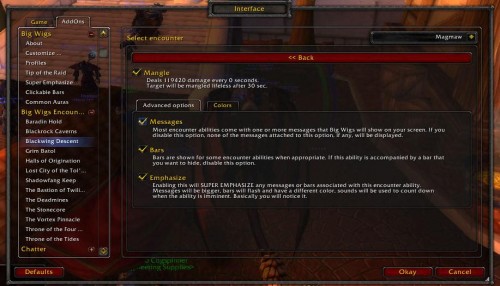 I'm configuring Mangle to super-emphasize so I know to blow a cooldown on the tank. 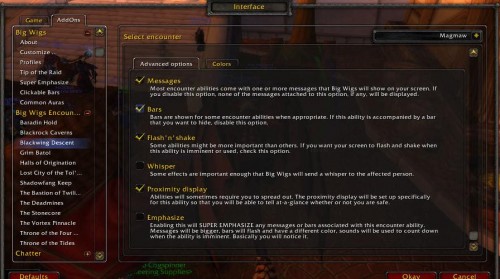 For example, this ability has an optional proximity warning, the ability to whisper, and a flash/shake. 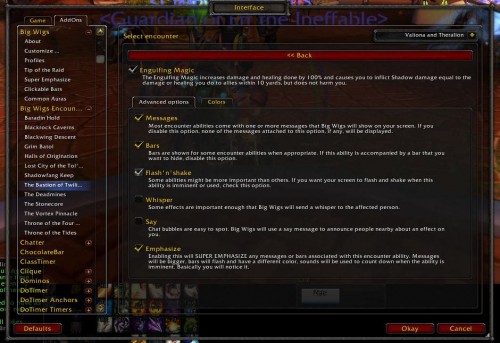 This one allows you to SAY that you are afflicted by the ick. 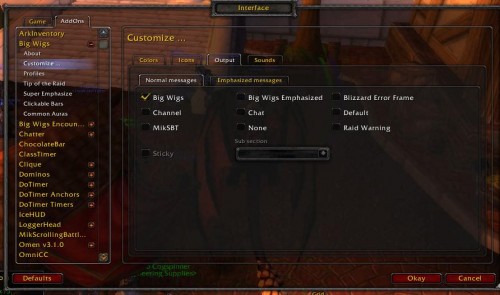 Ok, now we get to the good part, how it keeps you from standing in fire.

That’s right, not just emphasize, SUPER-emphasize.  You can configure it to display in the main display area for warnings, or a special area just for the super-emphasized junk. 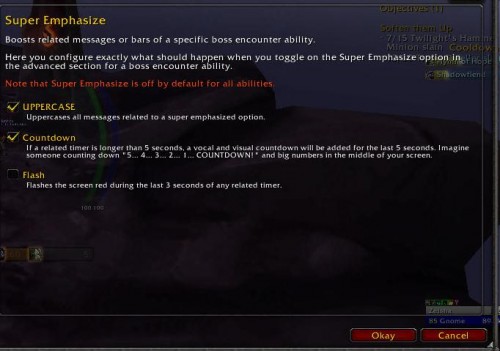 These are the settings I use.

The next part makes my freakin day.  You ready?  It’s COUNTDOWN.  That’s right, it will warn you when something is about to happen with a big fat number countdown in the display area while a robot voice Glados counts down from 5 in your ear.  It’s better than having the raid leader call it out because, hey, vent has delay.  By the time the countdown got done, you’d better believe I was in position and ready for the ick.

The last option is screen flash.  Meh.  I found it was unnecessary with the COUNTDOWN of awesomeness.

Now, caveat here.  If you super-emphasize too many things, then you’re getting a constant barrage of countdowns, and it loses its meaning.  But for the things that are totally super-bad and will wipe the raid, it’s highly recommended.  It’s turned off by default and I’d only Super-emphasize 1-3 abilities per encounter, once you figure out which ones are more difficult for you to avoid.

Not as cool as super-emphasize, but it certainly has a leg up on DBM range checker.  This one is a tiny little minimap that turns red and emits a little beep when someone is within the predetermined range from you.  (Yes, it sets its own range to the appropriate number.) Not only can you immediately tell when someone is too close, but you can actually figure out where to move to fix the issue with a visual minimap display. 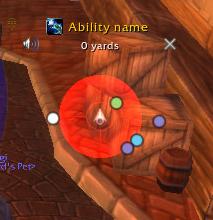 Eepers, get away from meeeee!

Note that if you want to show boss statuses for old content, you will have to download the appropriate module for WOTLK/BC.  There are also some other modules that are cool:

If you want warnings for the dungeons in cataclysm, you have to install Littlewigs separately.  Same general principle. 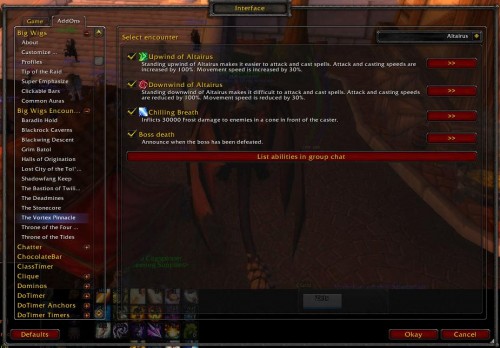 Hey, I care when I'm downwind

This module lets you create timers and notifications for raid events such as alerting you if there’s a repair bot or feast down.  It also can alert you of tanking cooldowns and raid cooldowns such as heroism.  I turned off the tanking cooldown display because I have it show in my raid frames, but it might be useful for raid leaders or healers who would prefer not to show tanking cooldowns within the raid frames. 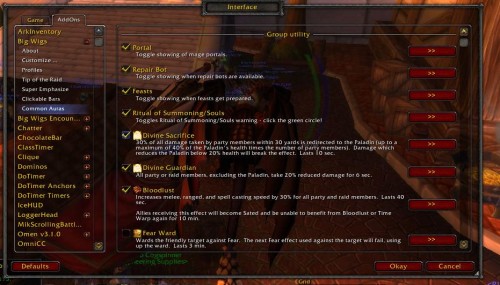 When there's a fish to be eaten, I want to know.

If you’re avoiding the bad like a pro, maybe you don’t have a reason to make a change.  But if you’re having some frustration with situational awareness on raid night, maybe a change will help you focus.