The lightwell is a powerful tool that costs very little mana for its healing power.  Unfortunately it also depends on two things:

I like RSA a lot.  You can customize the message and – here’s the best part – unlike macros, the text fires when the lightwell is placed, not when you hit the lightwell button.  That way if you have to cancel your cast and inch closer to the boss to place it, you won’t be spamming with messages.  It will only give a  message when the lightwell is on the ground.

This is a low tech solution, but I can’t recommend it, because it fires when the button is pushed, not when the lightwell is actually placed.  It will work well enough if you’re decisive and quick in your lightwell placement.  However, if you’re like me and have to often cancel the cast and start over in a different spot, macros are not for you.

Again, I love this.  It will unobtrusively display lightwell clicks wherever I tell it to.  I have it display clicks to only me, in chat box, so I can scroll up and see who clicked and who did not during the battle. You could spam it to the healer channel if your healing team likes that sort of thing. 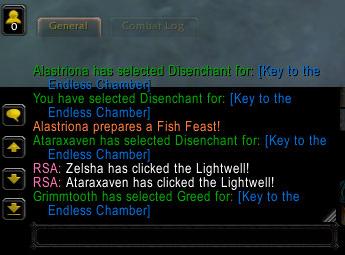 Grimmtooth is a winner! (But not like Charlie Sheen.)

To get the most of your lightwell, you need to replace it as soon as it expires – encounter permitting, obviously.

This addon was recommended by Rhii.  Basically it allows you to program in a delayed statement into a macro.  So the macro would fire and then in the predetermined number of seconds later, it will tell you (you can whisper self) “hey idiot, REPLACE THAT LOLWELL”.

This works great for things like mana tide, but not so well for lightwell because, as I mentioned, there is a delay between button push and lightwell placement.  For Slash in, the clock starts ticking when the button is pushed, not when the well is placed, and does not understand “false starts” where you cancel without placing the lightwell.

I totally recommend this addon for something like shadowfiend, but not for lightwell.

Power auras is a versatile and fabulous addon.  You can program in an icon to appear whenever lightwell is off cooldown (also – a sound if you’re into that).  To save your sanity, you might want that icon to appear only when you are in combat, or that stupid icon will taunt you wherever you go.

I feel ambiguous about this method because if I see an icon on my screen, I must IMMEDIATELY perform the action to make it go away, even if it’s not the right time.  Or, if it is always in my field of vision, it becomes “background” and I don’t immediately notice it. 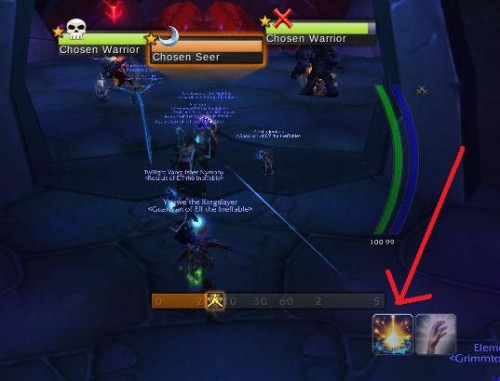 I am running with a power aura for lightwell cooldown currently, but it only shows while in combat.  Here it is:

If you dislike annoying icons telling you what to do, you can try the “one and done” method of MSBT.  The advantage is that there’s a one-time reminder that disappears after the allotted time.  The bad news is that it disappears and you might miss it.

You can add a sound to it so it is less likely that you will miss it if you program in a particularly obnoxious noise.

Remember: a scrolling battle text reminder only works well if you don’t have a whole  lot of other crap up there.  If every single action, every buff gained, is reflected in your battle text, your important reminders get lost in the noise.

The filters are not great, so I ended up having to manually add cooldowns rather than using the built-in cooldown tracker. The end result is nicer, but the setup was a pain. 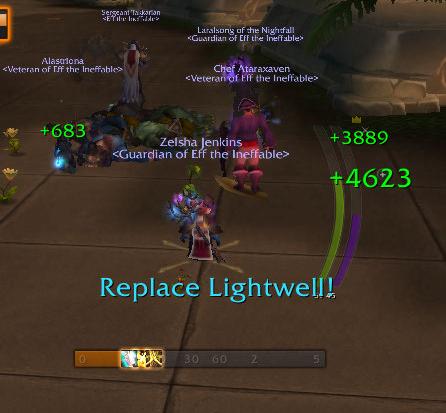 I use this for all my cooldowns, with the bar setting and “splash” when the cooldown is up.  Because all my short cooldowns are also on the cooldown bar, it’s hard to notice the lolwell cooldown. 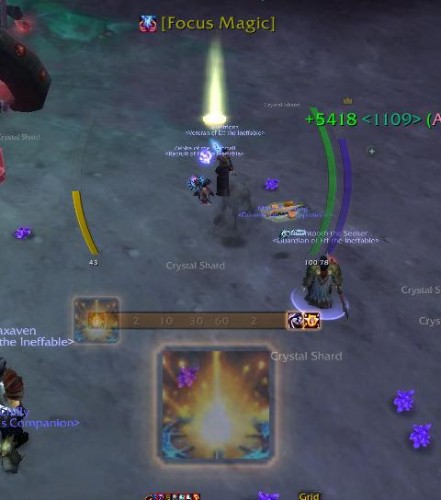 When the lolwell gets to the end of the bar, it flashes, and there is a splash icon below as well.  How to do this? Tales of a Priest has a Guide.

I don’t recommend these YET but I’m intrigued.

In theory, a lightwell clicker could bind a key that targets the lightwell, clicks on it, and then goes back to the last target.  However, Gnoble tried this and can’t get it to work.  (This is not for the priest, this is for the DPS who complain that clicking the lightwell is TOO HARD.)

This lightwell tracker does a variety of things, far more than Raeli’s spell announcer, including tracking charges.  Unfortunately, it does not have a settings menu yet, and a lot of the default settings are not to my liking.  And I’m not about to muck about in the lua file.  In particular, it whispers someone if they use the lightwell improperly (when the player’s health is too high and there’s overheal).  I don’t want to yell at ANYONE for actually USING the lightwell!

Once this addon gets more refined, I’ll definitely take a go at it.  If anyone else wants to brave the lua, I’d be interested to see how that goes.