↓
This entry is part of the series: The Casual Raider's Handbook

OK, don’t be fail on your raid prep just because you don’t have time.  Here’s a handy (mental) checklist that I go through every week so I’m not totally WUT at raid time.

Ok, last week you got a brand new hat.  You were tired after the raid and totally blanked on enchanting and gemming it.  And by next week, you forgot that you hadn’t done it.

The night before, AUDIT YOUR TOON.  You can do this from the armory.  You don’t even have to log in.

You hit Advanced, then  look at the bottom of the screen and you see the audit. 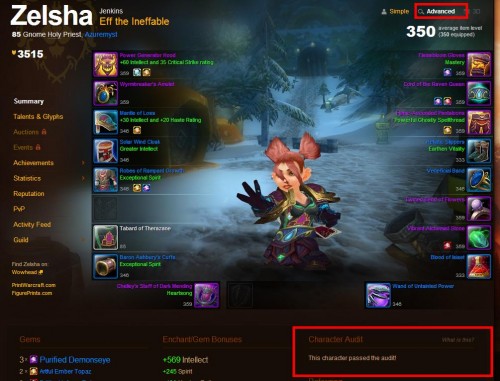 This is my raiding main, and unsurprisingly I pass.  The audit tells you whether you are missing enchants, gems, or a belt buckle.  It takes into account whether you have special crafter-only enchants. 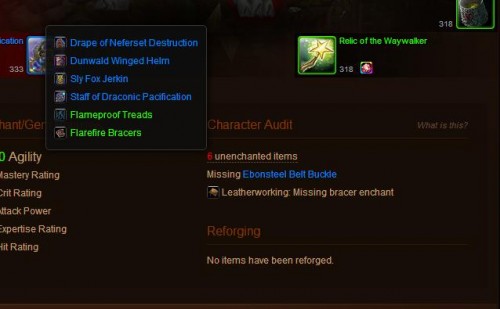 Now, this is my fail alt.  I saw that there were 6 missing enchants!  Mousing over the missing enchants, it shows me which pieces I should fix.  I am also missing a belt buckle.  The auditor also reminds me that I have a crafter-only enchant that I could do.

(Note: The crafter-only enchant thing is sometimes dumb. It keeps telling Rhii that she needs to do parachute cloak rather than +50 intellect.)

It doesn’t hurt to check this once a week, just in case you’ve totally spaced on fixing up a new item.

There’s not much to say about this.  Don’t depend on someone to make a feast.  Don’t depend on a mage table unless you have a ton of mages.  Bring one flask for each hour a raid is expected to last, and one extra just in case.  And a mana or health potion can save the day.

Make sure your stuff is updated, but don’t suddenly “try something new” on raid night.  Do it on a night when you’re just doing heroics.

You want the very latest version to avoid foulups with the latest WoW version, but you don’t want to hold up the raid to fix your addons.  If you can update your addons when you get home from work, way before raid time, that’s best.   Unless you’re raiding on patch day, and there’s a danger of your addon not working, don’t hold up the raid to update.

You are wasting everyone’s time if you don’t.  I recommend both a write up and a video, to reinforce the message.

If you studied up last week, you should STILL do a refresher before the raid unless your target is on farm.

Being ready at go time does not mean logging in one minute beforehand, demanding a summon, and then not accepting it because “I gotta grab something from the bank…”.  It means being at the instance, totally ready to go, zoning into the swirly door one minute beforehand.

If you can’t be online early because you are putting the kids to bed, get your toon loaded up with consumables, repaired, fully ready, and then park outside the instance.  It’s not like you need the rest xp.