This weekend, I tested out Lightwell Geespot.  Previously, I did not want to use this addon because it lacked a config menu, and I was not about to muck about in the LUA.

I’m going to say that this was a LIMITED test drive in the sense that I did not want to annoy my guildies with senseless blather.  For this reason, I primarily used the “announce to self” feature.

For announcing to the group, I would still recommend Raeli’s Spell Announcer.  However, for enhanced, detailed information for yourself, I recommend Lightwell Geespot.

You hit /lwg to get the config up.  The first page is a weird stats page that has potential but doesn’t appear to be working properly.  Just hit the “configuration” button. 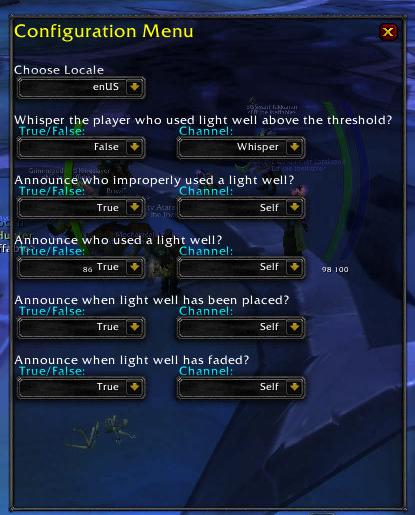 About the above options, in order…

However, I’m not going to be doing a damn thing to discourage lightwell use.  I’ll worry about overheal when all the charges are actually getting used.  See how there’s no screenie?  I’m not annoying my guildmates with this.

Verdict: Not recommended, unless reducing lightwell overheal is an important strategy for your raid team.

Announce who improperly used lightwell. This announces in a specific channel who clicked the lightwell when over the health threshold – unlike the above option where it whispers the clicker

Can you imagine this spamming in chat? Ew, annoying.  Your ass would be kicked out of the raid.

Verdict: You can use it as self-only if you want that information. Do not use for announcing publicly. If your raid values reducing lightwell overheal, use the whisper option, above.

Announce who used a lightwell.  Hells yes, this is what it’s GOOD FOR.  Now, Raeli’s Spell Announcer does tell you who used the lightwell, but it does NOT tell you how many charges are left.  Observe the comparison:

Remember, folks, if you announce this to the raid, you will have your fingers broken by the raid leader.  Promise.

Verdict: Highly recommended for self-only. Do not use for announcing publicly.

Announce when lightwell has been placed.  On the upside, this announcement gives a lot of information (number of charges and average heal).  On the downside, it’s not customizable.  I am continuing to use Raeli’s Spell Announcer for lightwell placement.

I have it here set to announce to myself only.

Verdict: Recommended for announcement to raid, unless you have another announcer addon that you prefer.

Announce when lightwell has faded.  Sure, why not.  Again, I’d only announce this to self.  The raid does not need to know when the lightwell fades – only when it is placed.

Of course, there are plenty of ways of tracking lightwell expiration, but this is another reminder.

Verdict: Take it or leave it.  Use it if you find it helpful, but other addons are just as good for noting when lolwell fades.  Do not announce to the raid.