ArcaneTinkerTank (otherwise known as Gnoble, Husband, and He Who Sleeps On Couch) is dead wrong.  Now what?

It all started when Gnoble announced that he was going to start tracking death rates on raids.  With like, numbers. 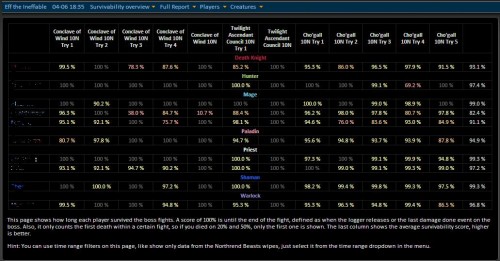 I have no effin clue why I blacked out the names since you all KNOW who is in our guild. Duh.

Now we can get into the pros and cons of the policy – but that’s not the issue.  The issue is that he’s my husband and I thought he was being dumb.

I obviously (privately) told him he was dumb.  In fact, I have his ear quite a lot, so I can explain the dumbness – over IM, in the car, during dinner (Mama Murloc is refusing to take sides).  But now what?

You see, if I say nothing on the forums, it looks like I agree with him – not because silence is usually construed as agreement, but because I’m his wife.

On the other hand, posting on the forum is incredibly artificial because… well he already knows what I think.  My arguments have obviously done nothing to sway him from his opinion.  Why the hell bother?

Ultimately I did post on the forums, just a short list of why I think it’s dumb, for the benefit of the other guildies.  And he posted back, a short list of reasons why my arguments are dumb.  It was a pretty dry exchange, since we had already scripted this out long before in our discussions over the dinner table.

However, I did get to threaten him with sleeping in the cat pan (not the couch, the CAT PAN) if this turns into healer blame for deaths.  I am also annoyed because this new “death ranking” doodad has foiled my nefarious plans to let Alas die for her lolwell haiku.