Recently I gave frost a second look because my offspec arcane I never played for two reasons. First we have two other raiding arcane mages in Eff the Ineffable which would make three complete lunacy, and second because I find arcane boring. Personal preference.

Now, I will admit I wasn’t initially eager to try frost because I am not a pet class lover. My only pet class (a warlock) I play affliction like it was a DoT mage, and since the water elemental (Squirtle) was a key part of being a frost mage I was not terribly enthused. However, this week has been an experiment in Frost and one that has me excited to feel like I have choice again when playing a mage.

Unleash the Beast Within With Frost!

If you go by a broad approximation from Ask Mr Robot you find that Intellect and Spell Hit are topping off the list and Haste, Crit, and Mastery are well below that and virtually interchangeable.

So basically reforge as much as you can into Hit and don’t worry so much what secondary stats gear has. If it is cloth and doesn’t have spirit, it should be fine. No real haste vs crit angst like fire or mastery vs haste like arcane.

I built off a basic frame Elitist Jerks provided and got this.

The rotation reminds me of Fire in the use of procs more so than Arcane does. Basically follow this list on priority for the spell to cast on single target fights.

For AoE you will pretty much use Blizzard. Maybe Cone of Cold if they get too close or frost nova and blink away to start casting blizzard again. 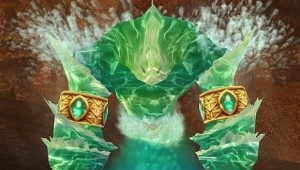 Like I said above I am not one for pet classes in general, but I find the Squirtle AKA Water Elemental to be pretty easy. First thing you want to do is bind the Squirtle’s freeze ability to some key you can easily get to instead of trying to remember ctrl+4 or mousing over to your pet bar. Second generally have your pet on passive by default. The last thing you want is to be lumped in with the hunters and warlocks who wipe a group because of a bad pet.

When a fight starts get the pet attacking the main boss. Don’t worry about trying to get your pet to attack adds, it isn’t worth your time to be micro managing the pet that much. Use the freeze ability on cooldown, but otherwise just forget about it and let it auto attack the main bad guy while you do everything you need to be doing.

Frost is pretty proc heavy, but doesn’t feel like it has as much as debuff management as Fire. I still don’t like having a pet, but it is not as bad as I remember. Be sure to set it on Passive though and direct it where to shoot. The last thing you want is to have your pet pull stuff before people are ready. For me frost has been on par with my Fire DPS on some fights, and trailed on others. But what it really gives me is some choice in how I want to raid a particular fight. For movement heavy fights I will probably stay fire, for fights with lots of adds I may choose frost. And sometimes just knowing a different way to play your class can help you refine your skills on your primary spec.