As a kid, I was never in a cool clique, or a clique of any kind.  Now suddenly, I am, in the most unlikely place – Team Heal. 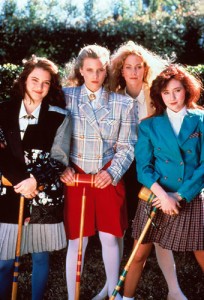 What is your damage, DPS?

In fostering a sense of teamwork, we seem to have become somewhat of a clique.  It wasn’t really intentional.  We just work together so much that it was bound to happen.  Because there are 3 regular healers in the raid rotation, 1 part-time healer, and 1 emergency-only-healer, we raid together regularly and dependably.

What makes a healer-clique so weird is that because there is only one healer per heroic, we almost NEVER get to run 5’s together.  One of us would have to break out a pitiful DPS spec.  Also, it seems wasteful to put 2 healers in the same group if we have a second group without any healers.  In other words, getting together in-game outside raid nights is a rare event.

We’re not cliquish because we make snarky comments, in a “Mean Girls” sort of way.  It’s not having the private channel, because we really only use that on raid nights for raid stuff (and, ok, the occasional snark). 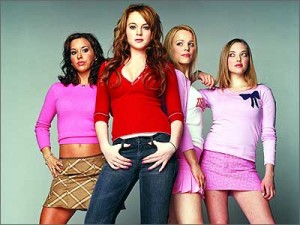 Do you think the tank is getting chubby?

It’s that, when I want to talk to someone in game, I feel closest to my fellow healers.  I’m more likely to whisper them about random crap, or want to run a heroic with one of them.  We like each other and seek out each other to hang with.  Is that wrong?

I’ll answer – it may be wrong and rude to other people not in the in-crowd, but I can’t bring myself to care.  I’m in the in-crowd!  We have private jokes that nobody else gets.  We crack each other up on a regular basis.  Cliques are cool.

Remember, there is no cure for SMS (Stupid Man Syndrome).  There is an effective treatment, crotch-punching, but it is still in clinical trials.  Symptoms may include scratching, bragging, flatulence, and excessive amusement at flatulence.  Of course you don’t get it.  It’s our PRIVATE JOKE, dammit.