Eff the Ineffable has a strict no alt policy on current content. T11 is about to get booted to farm night so alts are welcome and we will start to see some long time raiders wearing different shoes which will be a refreshing change. So with this no alt policy I’ve not done much raid tanking except the occasional Baradin Hold and a few wipes on Halfus one night when we had no geared tanks when we started raiding. So up to this point all of Gnoblerage’s tanking gear has been Reputation, Justice Point, Valor Point, Troll, Heroics, or crafted.

Last night a guildie wanted to finish a PUG BWD ID he had going. I was asked to tank, and three wipes later I am officially 1/12 on T11 content. 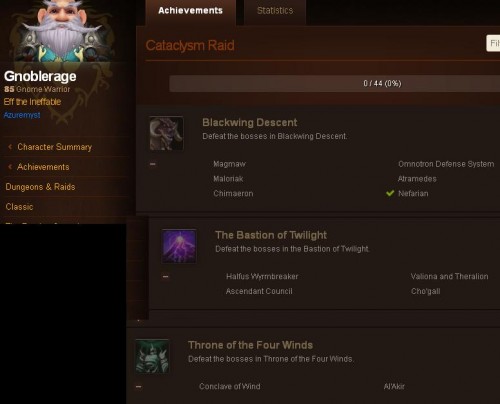 Yes this is post nerf obviously. And the troll heroics and addition of T11 to the Justice Vendor helps a lot in gearing choices. But that said I still had to maintain threat against T12 ready folks, and use my cooldowns properly. The point of this post is that by staying focused on what you want to do, you can catch up to progression ready people. I wouldn’t say Gnoblerage is ready for T12 yet. But he clearly is fine for anything in T11. With a few choice pieces he could be ready for T12 soon though.