Since getting back I’ve leveled up a warrior as a dungeon finder partner with Zel. I tank, she heals, no queues. Here I am with an awesome helm. 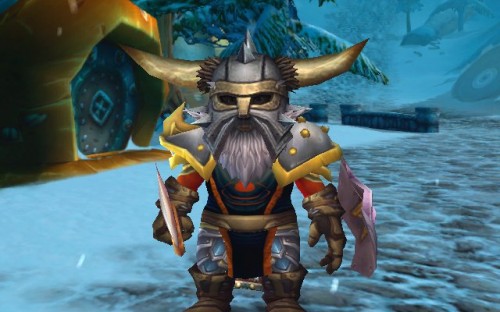 Since I’ve pretty much just done PUGs since level 30 I’ve noticed a few trends in your class that I feel I need to point out. Now I know there are good hunters. I’ve seen them, I’ve raided with them. But based on the hunters I’ve seen the last few weeks in PUGs, I am starting to realize the good ones might be the exception than the rule.

What I find annoying can best be summed up with three examples of bad play:

The Tale of Mr. Fluffy
One thing that happens more than it should is pets have some kind of taunt on. This makes sense when questing. It does not make sense in dungeons. In the wilds of Azeroth, a hunter would prefer angry things hit its pet, than its shiny mail armor which happens to be the second toughest armor in the game. Heaven forbid anything bleeds on it.

Anyway when in a group you (the hunter) have someone who signed up (the tank) to take the bloodstains you normally put on your pet. That person has a design for each pull, where they want the baddies to stand, where the baddies should face. When Mr Fluffy or Porkchop or Fartingbearlol taunts, that whole system your PUG tank is working for has been derailed. Bosses have AoE cleaves, and you pet can endanger the nice rogue who set up for back stab action.

The Tale of the Coke Fueled Ferret

The second bad bit of play I see involves a jumping hunter who thinks they can decide on the speed of the pulls. Maybe I’m not ready. Maybe I noticed the healer is low on mana. Maybe I’m waiting for a patr… Oh fuck you did it. Shit shit shit. Now I have to taunt it off you and okay I got this. WHAT THE HELL DID YOU PULL THAT OTHER GROUP FOR? SON OF A B—

The Tale of the Clueless Pull

So the first two tales are so generic they are ubiquitous. This last one is just too perfect to leave in general terms. In a PUG for the Throne of Tides we had a paladin who was pretty cool, and a hunter who seemed kind of clueless. It was fine because he actually didn’t fall into one of the first two problems. We had a wipe or two as we all struggled to remember the mechanics of the bosses and were headed down a hall that had these nasty little goblins with poison spears. If the tank rolls into the pull they all throw a poison spear at him and it is easily half to three fourths of the tanks health. The other mobs in the hall are these horrors things that do a nasty ground slam.  We managed to get to the second to last pull towards the third boss in the place. The paladin and I asked the Hunter if he could send his pet in to take one for the team (meaning “pet dies from the yucky poison rather than the tank”). He didn’t get what we were asking so we told him to have his pet attack, figuring this last pull of goblins was particularly bad and better to have a dead pet than a dead tank. So off his pet ran…to the two horrors just past the goblins, thereby pulling the two hardest pulls in the place at once. After the wipe the hunter dropped group. The paladin and I were just dumbstruck. Even when you give them instructions to pull a group, they still manage to screw it up.

The conclusion that I’ve drawn here is that when I see a hunter come up in my group I am preparing myself for the worst. I don’t want to, but collectively you’ve pushed me to say that hunter is BELOW warlock in my class estimation at the moment. If you turn off taunt and just not pull, I think you can regain my esteem, but I’m not holding my breath.