I managed to talk people into messing about on the horde side with my incessant QQ about being super-bored with the alliance.  7 years in wow, all alliance, I think it’s time for a change.1

As another change of pace, I decided to try to level my troll druid as balance rather than feral.  At level 10 I picked balance and went off to blast the shit out of things.  I had a nice sun/moon thingy tracker and was ready for action.

I got into combat and this giant fucking orb appeared over my head.  I have to turn THAT off, I said to myself, I just need to find out which addon it is.  Blizzard effects off, check.  It’s not supervillain.  It’s not droodfocus it’s… At which point I alt tabbed out to Google F Search and discovered to my horror that it’s just baked into the game above your character’s head and it will always be there without any way to suppress its idiocy.

I ran screaming for the nearest druid trainer so I could swap back to feral.  Experiment over.  Since I failed to take a screenshot of the godawful ball of evil in my haste to get rid of it, here is a dramatic reenactment, for posterity: 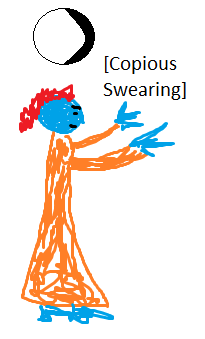